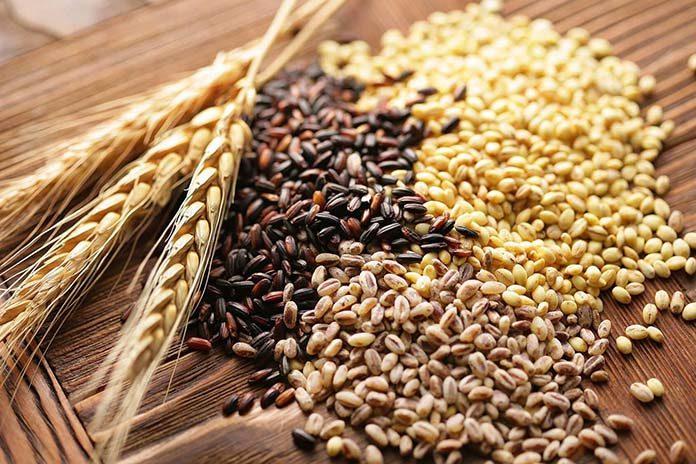 The aim of this study was to investigate the effect of grain type on performance and gut microbiota composition in broiler chickens under a necrotic enteritis (NE) challenge. Broilers were fed 3 different diets based on wheat, barley or rye, and were orally administered Eimeria and Clostridium perfringens to induce subclinical NE. The NE challenge significantly decreased weight gain, feed intake and counts of Bacillus and Ruminococcus bacteria in the caecal contents. Birds fed the rye based diets showed significantly reduced weight gain and feed conversion compared to the other diets. Rye fed birds also had the highest fluorescein isothiocyanate-dextran (FITC-d) marker in their serum and the lowest concentration of Ruminococcus bacteria and acetic acid in caecal contents. These findings suggest that grain type can directly influence the susceptibility and severity of NE challenge in broilers, largely through the impact of the non-starch polysaccharides (NSP) content of grain on nutrient availability, leaky gut, gut microbiota and short chain fatty acid composition. Necrotic enteritis (NE) is of great concern to the poultry industry due to its deteriorating impact on production and increasing mortality, resulting in a US$6 billion global economic loss. The causative agent of NE is Clostridium perfringens, a gram-positive spore-forming anaerobic bacterium. The subclinical form of NE is financially more devastating than the clinical form. This is due to a lack of obvious symptoms resulting in a delayed instigation of an effective treatment, and consequently a substantial loss in flock performance and reduced feed efficiency. Feed composition strongly influences the gut environment and hence may impact the severity of NE. Cereal grains such as wheat, barley and rye contain high amounts of non-starch polysaccharides (NSP). Soluble NSP increase digesta viscosity and reduce digesta transit time. Insoluble NSP act as a nutrient diluent and create a physical barrier to enzymes, thus reducing starch, protein and lipid absorption and digestion. The purpose of the present study was to compare the impact of high NSP containing grains (wheat, barley and rye) on susceptibility of birds to subclinical necrotic enteritis. Performance, leaky gut, gut microbiota and short chain fatty acid composition of NE challenged broilers were evaluated in the different diet groups. Discussion
High NSP contents can damage the gut through either thickening the digesta or causing dysbacteriosis in the lumen. Higher FITC-d levels observed in the rye diet fed chickens in the current study suggests that these diets had a more acute effect on the intestine tight junctions, causing a more severe leaky gut problem in the chickens. We also observed lower level of Ruminococcus bacteria in the caeca of birds fed with rye diets. The aforementioned bacteria are responsible for cellulose digestion, suggesting that lower performance observed in these birds could partially be due to lower polysaccharide fermentation in caeca. In addition, the lower level of Bacillus spp. and Ruminococcus observed in the NE challenged birds, could affect the acetate concentration due to lower degradation of starch and NSPs, which are the main sources for acetate production in the caecum. Fujiwara et al., (2009) reported that Bacillus spp. levels are associated with acetate concentrations in the caecum. Additionally, elevated lactic acid amounts in NE challenged birds have also been observed in other studies.