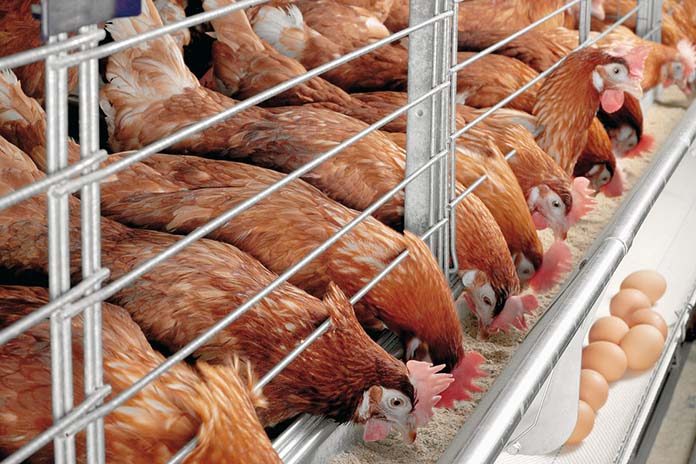 Ten Lohman-breed 22-24 weeks hens brought from poultry enterprises in Konya region with respiratory distresses, asphyxia and bloody exudates in the mouth and nose were the basis for the present study. The tissue samples taken from the internal organs of necropsied hens were fixed in 10% formalin solution, then routine tissue processing procedures were carried out. Prepared and stained tissue sections with hematoxylin-eosin were examined by light microscopy.

In macroscopic examination, bloody exudates in the mouth and face, blood clots in the lumen of the larynx and trachea, and the widespread mucosal bleeding were found. Degeneration, desquamation and loss of cilia of the larynx and trachea epithelium, spilled epithelial cells and syncytial cells mixed with blood in the lumens were detected during the microscopic examinations. In these cells, prominent marginal hyperchromasia in the nuclei and eosinophilic intranuclear inclusion bodies were noticed. Besides, there were hemorrhagia and mononuclear cells infiltration in the lamina propria.

As a result, thanks to the clinical macroscopic findings, hemorrhagic inflammation status and disease- specific inclusions seen in the trachea and larynx, the cases were defined as ILT. It has been asked to draw attention, with this presentation, that epidemic disease began to spread in poultry in the Konya region, where it had not been observed for a long time.

In this presentation, Infectious Laryngotracheitis (ILT) has been described with characteristic findings such as respiratory disorders, hemorrhagic tracheitis, laryngitis lesions and widespread deaths in laying hens’ companies. Although it can be seen at any age, ILT is more prevalent during the laying cycle. The disease is a contagious, as a viral infection with high mortality and morbidity and it is also characterized by shortness of breath, respiratory depression and bloody sputum formation in poultry. The agent is Laryngotracheitis Virus that is included in the Herpesvirus group, also known as Gallid Herpesvirus-1. Difficulty breathing, forward extension of head and neck during breathing, closing eyes and respiratory wheezing usually occur in sick animals. Bloody exudates excreted by infected animals with their mouth and nasal discharge contaminate to the body of other chickens and some places of the walls and equipments in the hencoop. This is fairly typical in terms of diagnosing the infection. Cyanosis in the head of the animals, runny tears and smelly nose discharges may also occur in the disease.

Widespread hen deaths were seen in a large number of poultry enterprises in Konya and from two of them were brought to the Department of Pathology, Selcuk University, Faculty of Veterinary Medicine for detailed pathological examination. Systemic necropsies of the chickens were performed and the tissue samples were taken from the internal organs, and then fixed in 10% formalin solution, subsequently the tissues were subjected to routine histopathological follow-up procedures. After these treatments, obtained paraffin blocks were sectioned at 5 micron thickness. The resulting tissue sections stained with hematoxylin-eosin were examined by light microscopy.

Hens presented difficulty in breathing, asphyxia, widespread deaths with bloody exudates in mouth and nose. During the macroscopic examination, bloody exudates in the mouth and face, blood clots in the lumen of the larynx and trachea, and widespread the mucosal haemorrhages were found. Lung, liver, spleen and kidneys were in normal sizes but the colors of them were pale.

Microscopically, degeneration, desquamation and loss of the cilia in the epithelium of the larynx and trachea were obvious, and there were desquamated epithelial cells and necrotic cells mixed with many erythrocytes in the lumens. Syncytial cells were also found as groups of 3-5 cell set among desquamated cells in the lumen. In these desquamated and epithelial cells, prominent marginal hyperchromasia in the nuclei and eosinophilic intranuclear inclusion bodies were also detected. The inclusions were mainly found in the cells within the lumens. Lamina propria had hemorrhage and mononuclear cells infiltrations. Syncytial cells formation in air capillaries lumina in the lung was also observed but inclusions were not seen in these cells. There was no pathological change in other organs.

Further to the hemorrhagic inflammation status and disease-specific inclusions seen in the trachea and larynx, the cases were diagnosed as Infectious Laryngotracheitis.