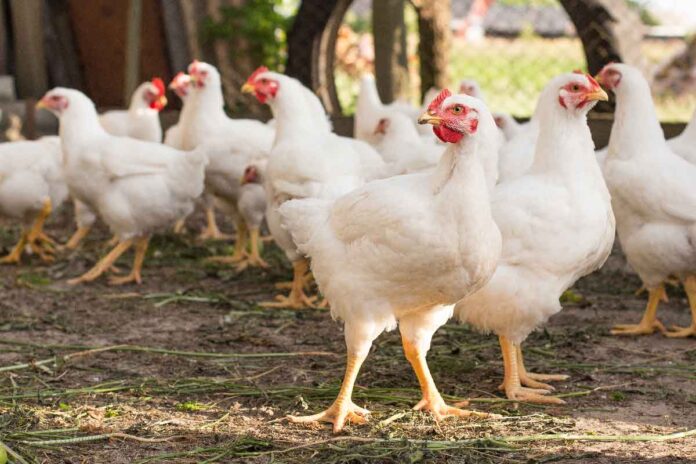 Grains are the major energy sources in broilers. However, they also supply about 40% of the total dietary protein and contribute significantly to the provision of some indispensable amino acids. Despite the low protein content in maize, owing to its higher inclusion levels (50-70%), it may contribute approximately up to one-third of the protein requirement of broilers.

Standardised ileal digestibility coefficients (SIDC) of nitrogen (N) and amino acids (AA) in maize and barley in broilers at six different ages (days 7, 14, 21, 28, 35, and 42) were investigated. Two assay diets were formulated with the similar inclusion level (938 g/kg) of each grain as the sole source of AA. Titanium dioxide was incorporated as an indigestible marker. The assay diets, in pellet form, were fed to six replicate cages housing 14 (day 7), 12 (day 14), 10 (day 21), 8 (day 28), 8 (day 35), and 6 (day 42) birds per cage for four days prior to digesta collection from the terminal ileum. The apparent ileal digestibility coefficients (AIDC) were standardised using age-appropriate basal endogenous AA (EAA) losses determined in a previous study from birds fed an N-free diet. No age effect (P>0.05) was noted for the SIDC of N in maize. But the average SIDC of indispensable (IAA) and total AA (TAA) was influenced in a quadratic manner (P<0.05) with the values being higher at day 7 that decreased at day 14, increased and plateaued between days 21 and 35 with a further decrease at day 42. The average SIDC of dispensable AA (DAA) was influenced linearly (P<0.05) with higher values at day 7. In barley, the SIDC of N, average IAA, DAA and TAA was affected (quadratic; P<0.001) by age. The digestibility increased from days 7 to 21, and then plateaued up to day 42. The present findings suggest that the SIDC of AA in maize and barley are influenced by broiler age and that the age effect on AA digestibility may need to be considered for precise feed formulation.

The inclusion of barley in poultry diets remains limited because of relatively low metabolisable energy, high content of fibre and high soluble and insoluble non-starch polysaccharide (NSP) contents. Because of their viscous nature, the water-soluble fractions of NSP in barley exert a negative impact on the digestion and absorption of nutrients, including amino acids. Despite the potential effects of age, only sporadic and inconsistent data exist on the age influence on AA digestibility of ingredients in broilers. Although several studies have reported the ileal digestibility of AA in a range of feed ingredients, only a few exist on the age-related standardised AA digestibility and the data are limited to two or three specific broiler ages. To the authors knowledge, no studies have investigated the standardised ileal digestibility coefficients (SIDC) of AA in maize and barley from hatching to the end of growth cycle of commercial broilers. The current study was designed to determine the SIDC AA in maize and barley at six different ages (days 7, 14, 21, 28, 35 and, 42 post-hatch) of broilers.

Two experimental diets were developed with similar inclusions (938 g/kg) of either maize or barley as the only source of AA in the diet. The diets were steam-conditioned at 70 °C for 30 seconds and pelleted. Titanium dioxide (5 g/kg) was incorporated in both diets as an indigestible marker. A total of 696, one-day-old male broilers (Ross 308) were raised in floor pens and fed a commercial broiler starter diet from days 1 to 21 and a commercial broiler finisher diet from days 22 to 42 in pelleted form. On day 1, 168 chicks were individually weighed, and allocated to 12 cages (14 chicks per cage). The remaining chicks were allocated to 12 cages for ileal AA digestibility determination at 5 different ages, namely day 7 (12 birds per cage), day 14 (10 birds per cage), day 21 (8 birds per cage), day 28 (8 birds per cage), and day 35 (6 birds per cage). The test diets were offered for 4 days [days 3-7 and 10-14 (crumbled); days 17-21, 24-28, 31-35, and 38-42 (pelleted)] prior to ileal digesta collection. On days 7, 14, 21, 28, 35 and 42, all birds were euthanised by intravenous injection of sodium pentobarbitone and the digesta were collected from the lower half of the ileum and pooled within a cage. Representative diet and digesta samples were analysed for dry matter, titanium, N and AA. The apparent ileal digestibility coefficients (AIDC) data were standardised using the basal endogenous N and AA (EAA) losses measured in a previous study at different ages (days 7, 14, 21, 28, 35 and 42) of broilers. Data were analysed by the GLM procedure of SAS and differences were considered significant at P<0.05. Orthogonal polynomial contrasts were performed to determine the linear and quadratic effects of age. 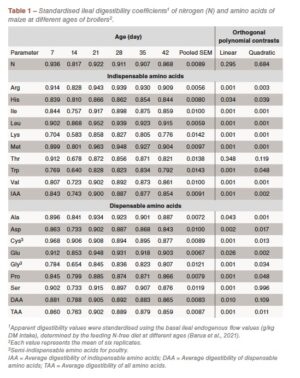 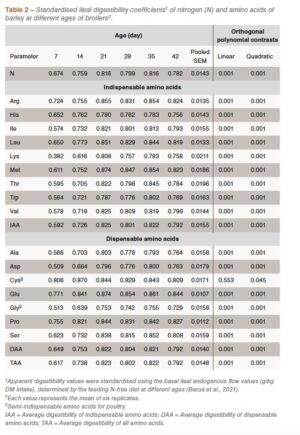 In the SIDC calculations, the AIDC were corrected for the basal EAA losses from various digestive secretions, pancreatic and enzymatic secretions and unsurprisingly these two values were different with SIDC being higher. In this study, age appropriate EAA flows were used to standardise the apparent digestibility estimates. The basal EAA losses of TAA at day 7 (12.93 g/kg dry matter intake; DMI) was twice than that of the average of days 14 to 35 (6.19 g/kg DMI), and almost three times higher than day 42 (4.48 g/kg DMI). After correcting for age appropriate EAA, an increase of 32.5% in the average SIDC of TAA at day 7 was observed in maize that was almost two times higher compared to that from days 14 to 35 (13.9-17.0%), and three times more than the increase at day 42 (9.85%). Similar to maize, the average SIDC of TAA in barley at day 7 was 31.5% higher than the average AIDC of TAA, which decreased to 7.17% at day 42. Among the individual AA in barley, the lowest SIDC was recorded for Lys at day 7 mainly due to very low AIDC Lys at this age. Correction for the EAA losses, did not uplift the SIDC Lys to the same extent of other AA because of low endogenous Lys losses at day 7. The exact reasons for the observed age effects on AA digestibility are intricate and complicated by the interactions among a multitude of factors including the ingredient type, digestive tract development, secretion, and activity of proteolytic enzymes, EAA flows, digesta passage rate and activity of intestinal microbiome at different ages. Overall, the current findings suggest that the age influence on AA digestibility is dependent on grain type and specific AA. The SIDC of AA in maize and barley are influenced by broiler age and that the age effect on AA digestibility may need to be considered for precise feed formulation.