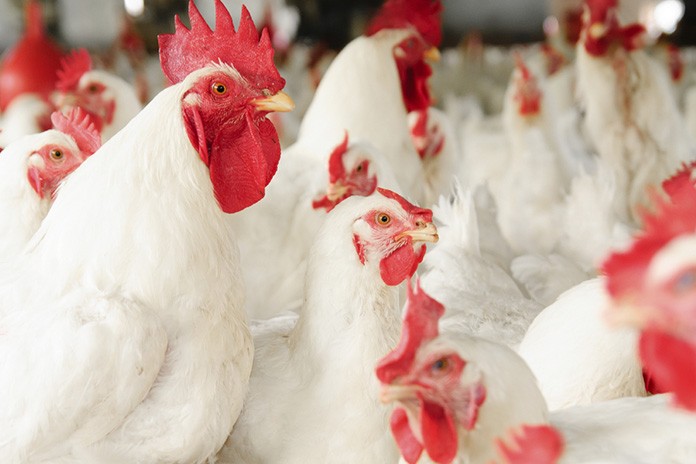 – Strict down-time between placements: Operation with minimum 14 days downtime with good clean-out (bird clear out & litter cake removed). Depends on your production practices down-time should start when birds are out of the house.
– Optimum stocking density: Increase a 0.05 ft2/bird compared to your current conventional program, to help keep litter moisture at a minimum, which in turn reduces the shedding of cocci-oocyst and pathogenic bacteria over population. Industry Stocking density have been in continuous debate. A study by Bilgili and Hess (1995) examining three densities of 0.8, 0.9 or 1.0 square foot per bird. In the study they found a significantly improvement when birds were given more space when looking at body weight, feed conversion, mortality, carcass scratches and breast meat yield.
– Good litter management: Dryness of litter and ammonia level are a big key success in raising poultry. Litter sanitation and treatments when using build-up litter need more attention with littler amendment. A well-documented research on the negative impact of ammonia on bird performance was reported. Using litter amendment and adequate ventilation are the most practical way to control ammonia and improve littler quality. In addition build-up litter consider as a community of microbes of various types and composition. Total litter cleanout is much recommended least once a year.
– Control environment housing: Including temperature, humidity, and air quality. Adequate ventilation is a key in controlling house environment quality. Genetic companies provide a well documents information on temperature, humidity and air quality for raising broiler. Dust is an excellent carrier of bacteria and mold are potential source of Infection. Antibiotic resistant bacteria have been reported in broiler chicken air. Airborne dispersion of Antibiotic resistant bacteria should not be underestimated considering poultry respiratory health & poultry workers in the farm.
– Pre-Starter feed: it’s important to establish good gut microbial population to achieve a balance in gut microbiota (such as using Probiotics, prebiotics, organic acids, short and Medium chain fatty acid, and phytogenic) for nutritional enhancement of GI tract, boost immune development, and facilitate nutrients absorption. Also a special attention to feed particle size, protein & fat quality, & specific additives.
– Water quality and sanitation: Marinating a good water sanitation program is a key to poultry production. Water is the most important nutrition for the birds. A routine water quality analysis for bacteria, pH, hardness, minerals and total dissolved solid should be conducted yearly. Flushing and disinfecting between flocks as well as during flocks with good quality disinfected that allow the removal of pipe line build-up biofilm. Biofilms are a sticky film that can be find inside water lines, regulators, and nipple drinkers and can be composed of bacteria and other organisms. Chlorine is the most popular sanitizer, however there are other well documented sanitizer that includes hydrogen peroxide, chlorine dioxide, and ozone. In addition, Acidifiers are used to improve the effectiveness of the sanitizer and reduce bacterial growth in water lines.
– Feed additive alternatives: Alternatives such as probiotics, prebiotics, organic acids, and enzymes have been considered and studied to prevent NE in recent years. Hofacre et al. conducted several studies using probiotics to demonstrate the reduction of NE lesions. Hofacre and others reported a reduction in mortality rates from 60% to 30% in day-old chicks. Probiotics microorganisms such as Lactobacillus, Bacillus subtilis, and Bacillus licheniformis significantly improved immune response and antibody production when fed to broilers, improve production performance, increase microbial balance, improve feed consumption when fed to both broilers and layers and lower the gut pH and the release bacteriocins. Although many articles in the current scientific literature refer to the “beneficial effects” of probiotics, some of the articles are often unclear on what benefits are provided to the animal.

In conclusion, the demand for poultry meat as one of the most important sources of animal protein is rapidly increasing as the world population continues to grow. Infections caused by pathogenic microorganisms can be of major concern for farm family’s involved in poultry production. Pathogenic E-coli, Salmonella, and Clostridium are responsible for reduced growth rates and increased cost of production. Traditionally, AGP have been used commonly in poultry feeds to maintain the health of chickens and turkeys. Unfortunately, the long term and extensive use of antibiotics results in selection and survival of resistant microbial species, therefore, posing a threat to the health of both animals and humans. Consequently, some countries have restricted the use of AGP in poultry. Since probiotics do not result in the development and spread of microbial resistance, they offer the potential to become an alternative to antibiotics. Several feed additive could be successfully used as nutritional tools in antibiotic free poultry feeds for promotion of growth, modulation of intestinal microflora and pathogen inhibition, immunomodulation and promoting meat quality of poultry.
From the Proceedings of the 2016 Midwest Poultry Federation Convention.