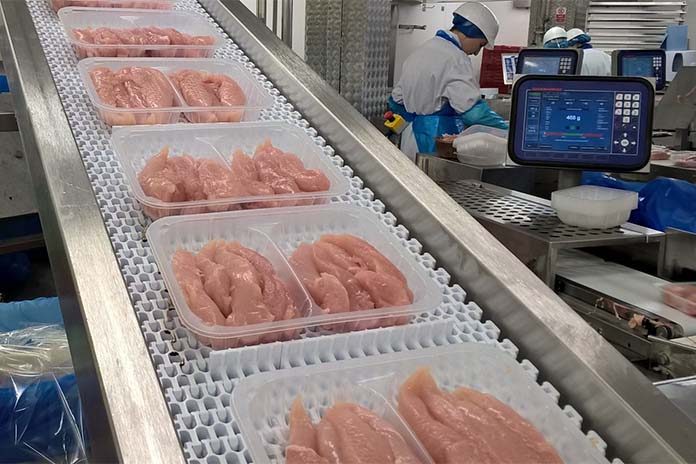 Over the past fifty years, a remarkable change occurred in global meat production. This is true as well for the production volume as for the share of the main meat types in the overall production. This process can in short be termed as a red-white-shift, indicating the decreasing importance of red meat and the increasing importance of white meat. In this paper, the dynamics at continent level will be documented.

Great differences in the development of the meat types

The remarkable dynamics in poultry meat production in comparison to the other meat types is a result of several steering factors. Very important is the fact that there are no religious barriers prohibiting the consumption of poultry meat. Other important factors are the broad variety of meals, which can be prepared with poultry meat, and the global success of fast food chains. While beef reached considerable market shares in these restaurants in preparing burgers, pig meat was and still is unimportant.

Other steering factors for the success of poultry meat are the comparatively low production costs because of the favourable feed conversion rate and the short succession of generations which enable fast adaptions to market changes. Trade with poultry meat also changed considerably over the analysed time-period. Deep frozen whole birds are no longer the main traded product, cut up parts and processed meat are dominating presently. In some countries, fresh products have gained in importance.

The American double continent plays an exceptional role in the red-white-shift of meat production. In the USA, poultry meat gained in importance already in the 1950s. Entrepreneurs like Frank Perdue and Don Tyson initiated the take-off of this meat type. Frank Perdue was one of the innovators. He very early realised the advantages of a vertically integrated company regarding production costs, meat quality and the constant supply for food retail. With the growing importance of broiler meat, a regional shift from the Midwest to the Southeast occurred (Windhorst 1989, p. 96).

Figure 2 documents that as early as 1984 more poultry meat was produced than pig meat, and some years later even more than cattle meat. While the annual growth rates in poultry meat production remained high over the following decades, they were much lower in pig meat and beef. From 2015 on, these two meat types showed higher growth rates again. This was, however, not a result of a growing domestic demand but of the increasing exports to Russia and China. In both countries, the African swine fever led to a sharp reduction of pig meat production from 2014 on.

Even though African countries are playing a minor role in global meat production with a production volume of only 16.5 mill. t, it is worth noting that from 2018 on more poultry meat than cattle meat was produced (Figure 4).

Between 1970 and 2019, poultry meat production grew by almost 6 mill. t or 998.3%. In contrast, cattle meat production increased by only 4.4 mill. t or 178.9%. Pig meat was much less important. Beside South Africa, Islamic countries were the main driving force behind the remarkable dynamics in the shift from red to white meat.

Poultry meat ranked only in second place in Asia and Europe

Asia and Europe have been in an unchallenged leading position in pig meat production for decades. From 1990 on, production in Asia increased much faster than in Europe. Because of the Mad Cow Disease crisis in the early 1990s, cattle meat production in Europe decreased continuously. Even though it grew much slower than pig meat and poultry meat, it showed an upward trend in Asia.

Figure 5 reveals that pig meat production in Asia increased considerably from 1980 on, mainly a result of the fast growth in China. About ten years later, a similar dynamics occurred in poultry meat production. In contrast to pig meat, it was a continuous growth. Frequent outbreaks of the foot-and-mouth disease and, in recent years, of the African swine fever virus caused interruptions in the upward trend of pig meat production. In 2000, the production volume of pig meat was still 25 mill. t higher than that of poultry meat; in 2019, the gap had narrowed to only 5 mill. t.

Figure 5 documents the drastic decrease in pig meat production. One can assume that the mainly affected countries will be able to increase their production volume again to the former level as soon as the highly infectious disease will be defeated. Nevertheless, a constant and fast growth of poultry meat production is expected for the coming years, in particular in Southern Asia and Islamic countries. This will result in a further shrinking of the gap between the two leading meat types.

Although the gap between the production volumes of pig meat and poultry meat was still considerably high in 2019, the development of the per capita consumption will result in a further shrinking. The already mentioned advantages of poultry meat in contrast to pig meat and cattle meat will unfold their effects. Table 3 impressively shows the ongoing shift from red to white meat also in these two continents.

Because of the comparatively low importance of Oceania in global meat production, in 2019 it shared only 2% in the production volume, the dynamics will not be analysed in detail.  Even though cattle meat was still the dominating meat type in 2019, the relative growth rates for poultry meat were about nine times higher than for pig meat and cattle meat.

The preceding analysis could document the remarkable dynamics in global meat production over the past five decades, which in short form can be characterised as a shift from red to white meat. This shift differed considerably between the continents.

In North and South America and in Africa poultry meat became the meat type with the highest production volume, in Asia and Europe, its relative growth rate surpassed that of pig meat and cattle meat (Table 4).

The lack of religious barriers that prohibit the consumption of poultry meat and because of the large variety of meals, which can be prepared with poultry meat, the per capita consumption increased continuously. The favourable feed conversion rate and the lower use of resources in comparison to pig meat and cattle meat production will also in future result in a fast growth of poultry meat despite the fact that cell cultured meat and especially plant-based meat may become serious competitors in the global meat market.