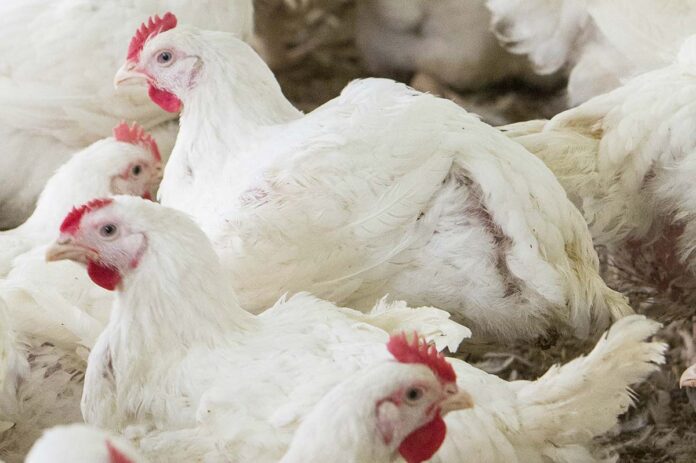 The poultry industry has seen an increase in several breast meat myopathies over the past decade. They range from woody breast syndrome (tough chicken fillet), to white striping and the so-called spaghetti meat (muscle fibre separation). All seem to be related to the quantity of connective tissue within the muscle. A number of researchers are of the opinion that they all have the same etiology.

It is currently estimated that breast meat myopathies cost the global poultry industry over $1 billion in direct and indirect costs. The incidence of these myopathies, within a given flock, appears to be related to factors such as growth rate, genetics, nutrition, management and bird activity. The resulting meat can have tougher texture, lower binding and reduced water holding, but does not present a food safety issue. However, because of the appearance of the meat some might be trimmed at the processing plant. Different segments of the industry are now working on reducing the prevalence, by modifying environmental factors and by genetic selection. The presentation will further explain the types of myopathies observed as well as the factors currently being studied in an attempt to reduce the incidence.

The rise in incidence of myopathies in young broilers over the past few years has resulted in the industry looking for solutions to reduce and/or eliminate their effects in the poultry flock. The main three myopathies of concern are the so-called white striping (WS – parallel white stripes on the surface of the broiler’s pectoralis muscle), woody breast (WB – accumulation of connective tissue fibres and fat cells in the inner pectoralis muscle), and spaghetti meat (SP –  appearing like splitting of the muscle bundles), which seem to be associated with fast growing and heavier birds. It should be noted that other myopathies in areas such as the leg, the dorsal part of the bird, and the deep pectoralis muscle are detected sometimes, but not at the levels of WS or WB, and therefore currently do not cause major concern.

Estimates of the costs and causes have been reported in recent years in both scientific journals and the general press. One such example is the 2016 Wall Street Journal article titled “Bigger Chickens Bring a Tough New Problem: Woody Breast” in which it was estimated that 5-10% of commercial chicken breast products could be affected by the WB syndrome. It also suggested that the cause is not necessarily associated with the final weight of the bird but more so with how quickly the bird reaches that weight. Later that year, a research estimated the annual cost to the American industry at $200 million. Today, estimates go as high as $1billion for the global poultry industry. The cost is associated with sorting out the meat, diverting some of the meat to ground and minced products, as well as trimming; i.e., downgrading of the meat. Overall, the industry has made big advancements in raising chickens faster and in a more efficient way and now some are suggesting that this has also resulted in increasing the incidence of myopathies.

Some researchers reported that the incidence of WS increases as body weight increases. They published data showing that, as broilers are raised above 2.7 kg, the incidence of severe WS increases. Today, we also know that it is related to the growth rate at a specific age of the bird, and not only to the absolute body weight. They have also looked at four different broiler strains and reported that the incidence of severe WS was 5% for the first strain, 35% for the second, 5% for the third, and 16% for the fourth strain. This shows that genetics plays a role, and currently breeding companies are working on selecting birds that are less susceptible to this myopathy. In addition, these authors reported that male birds showed higher numbers with severe WS compared to female birds (43 vs. 18%). Today, we know that overall body weight should also be taken into account, as newer data show that, at the same body weight, female birds tend to have a higher proportion of WS.

The reasons for developing these myopathies can vary quite a lot and there are different factors that can potentially contribute to their development. Overall, it appears that these myopathies are a result of muscle cell damage that does not have enough time for repair, especially in a fast-growing bird. That is one of the reasons that growth rate, at a young age (10-20 days), has been reported to be an important factor, and today some producers are using this knowledge to minimize myopathies. However, this also affects overall production efficiency which is a major driver for growers. There is also a growing body of literature focusing on oxidative stress and insufficient oxygen supply to the fast-growing pectoralis muscle, which can affect myopathy development.

White striation is the result of muscle fibre replacement with fat and connective tissue. In the past, it was more typically seen in older laying hens, but today it can be seen in young (30-50 day old) broilers. Under the microscope, these fillets also show some myodegenerative muscle fibers, inflammatory cells and infiltration of eosinophilic material; all are indicative of muscle cell injury and the beginning of repair. The WS fillets also result in lower water holding capacity, marinade uptake and higher cooking loss because they have less functional salt soluble proteins.

Woody breast fillets are characterized by firmer texture of the fillets. This can be detected in the live bird by palpation. When deboned fillets are placed on a flat surface, a distinct harder ridge can be observed. Sometimes, the affected fillets also show a paler appearance, some surface haemorrhages, and clear exudate on the surface. As the severity of WB and WS can vary, simple scales have been developed to rank their degree and severity: commonly a 0, 1, 2, 3 scale (Figure 1). Sorting of the meat is important to some meat companies, when meat from flocks with a high severity of WS or WB is graded and sent to specific operations. (e.g. nugget production).

The microstructure of the WB fillets also shows the accumulation of connective tissue fibres, adipose tissue cells, and lymphocytes; the latter indicate the removal of injured muscle cells. Sihvo et al. (2017) have described this type of histology by saying, “Histological evaluation revealed a significant association of myo-degeneration and lymphocytic vasculitis with WB. Vasculitis and perivascular cell infiltration were restricted to the veins. Results indicate that WB starts focally and spreads to form a diffuse and more severe lesion… white striping often coexisted with WB”.

Other researchers have hypothesized that localized hypoxia is present in WB tissue due to vascular disruption and/or stagnant tissue perfusion. When comparing the pectoral vessel density between unaffected birds and areas of focal WB in affected chickens, Sihvo et al. (2018) reported that the transverse myofibril area, per vessel, was highest in the unaffected area of muscles from cases of focal WB. This was significantly higher than in macroscopically unaffected tissue, indicating that relatively decreased blood supply may trigger the development of WB in affected birds. These authors suggested that such changes typically originate from osmotic imbalance, for which the most likely etiologies (in developing WB), include tissue hypoxia or myo-degradation of the surrounding myofibres.

In terms of genetics, another research compared large groups of broilers and showed that there was a difference between two purebred lines of commercial broilers with different selection history; i.e., the first group had breast meat yield of 29% and the other 21%. In both groups, there were birds with a high genetic potential for increased body weight and below average for the WB myopathies. These birds are the ones that can be used for selection, and currently that is what is being done by several breeding companies.

The authors further discussed the polygenic nature of these two traits and the relatively low genetic relationships with body weight and breast meat yield, which can facilitate genetic improvement across all traits in a balanced breeding program. They also emphasized the importance of understanding the environmental and management factors that can contribute over half of the variance in WS and WB incidences.

Currently, the industry is employing different strategies to minimize the occurrence of these myopathies. They range from controlling growth rate to genetics, as well as modifying environmental factors. Bodle et al. (2018) evaluated different dietary alterations and their ability to mitigate the WS and WB syndromes in high-yielding commercial male broilers. Their test diets included a commercial reference diet: increased ratio of digestible arginine to lysine; supplementation of vitamin C; doubling the vitamin pack inclusion; reducing the digestible amino acid density of the grower phase; combination of the 4 strategies mentioned above. Overall, there was no difference in performance at the end of the starter phase; however, at the end of the grower and finisher phases, feeding lower amino acid grower diets suppressed body weight and increased feed conversion. The WB score dropped from 1.83 in the control diet to 1.49, 1.27, 1.74, 1.53, and 1.43 respectively, in the diets mentioned above. Other researchers have also recommended using nutrition to help decrease the rate of WB and suggested vitamin C supplementation to enhance anti-oxidative metabolism.

Grading and sorting the meat is currently done by several companies, but not all. The most common way is palpitation and visual inspection; however employing near infrared (NIR) is gaining popularity. The detection is based on the fact that WB meat has lower protein and higher moisture content. The sensor can work at a high speed of about 200 fillets per minute, which is essential when sorting meat at a high-speed processing plant (15,000 broilers per hour). The sensor is currently being used in several plants and fine- tuning is still going on. The goal is to have equipment with the lowest possible false positive / negative samples, as this can have a big effect.

Acknowledgements: the author would like to thank the Ontario Ministry of Food and Rural Affairs for their financial support in conducting studies in this area.

From the Australian Poultry Science Symposium 2020