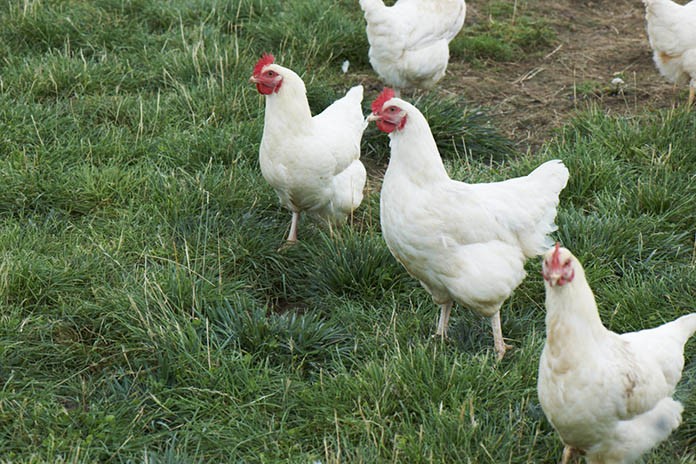 Free-range poultry production in Australia has increased in market share and continues to grow.
New poultry farms are being established to meet increased demand, but many are located within low rainfall marginal regions of southern Australia.

Free-range certification systems in Australia stipulate there must be palatable vegetation available to poultry on the range at all times. The challenge is to provide palatable vegetation in areas that receive as little as 250mm average annual rainfall with shallow infertile soils and hot dry summers.
The majority of studies on the forages used in free-range poultry are based on overseas research with species suited to high rainfall temperate climates. The limited research from Australia examined the medium rainfall (445mm average annual rainfall) sheep-cereal zone in South Australia. More recently, Singh et al. (2013) conducted studies to quantify the amount of grass consumed by poultry.

The main pasture species was Kikuyu (Pennisetum clandestinum). Kikuyu is a perennial tropical grass species that originated from eastern Africa suited to high rainfall or irrigation. New poultry production enterprises in southern Australia, both conventional and fre- range are being developed in drier marginal agricultural areas. Perennials such as Kikuyu will not persist in drier marginal areas without the use of regular irrigation throughout the summer months. Irrigation will not be sustainable during the high evaporative losses of summer in such areas.

In summer, limited water allocations will be used primarily for the watering and cooling of poultry. Forage species suited to drier conditions need to be considered for the marginal poultry production areas of southern Australia. Saltbushes are a possible candidate.
Saltbushes (200 species world-wide) have a wide geographic distribution in Australia and are highly adapted to low rainfall regions. Two species (Atriplex nummularia and A. rhagodiodes) have the potential to be utilized on the range for free range poultry as a feed source, shelter and shade in low rainfall areas. Research on saltbush and poultry production is scarce. Both studies used slow growing meat chicken breeds fed a diet that included A. nummularia.

In Australia the predominant meat chicken breeds are Ross and Cobb, bred specifically for fast growth and high feed conversion efficiency. We do not know what impact saltbush may have on modern breeds of free range poultry (meat chickens and layers), particularly in terms of production, nutrition, anti-nutritive factors and welfare.
From the Australian Poultry Science Symposium