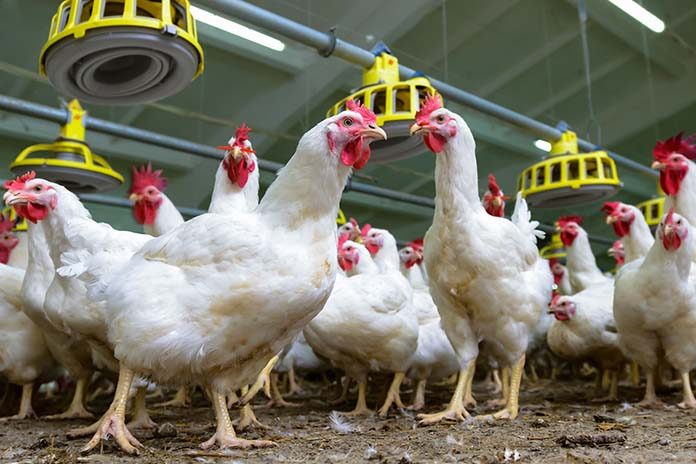 Marek’s disease virus, a herpesvirus that is the causative agent of Marek’s disease, is a worldwide economic burden on poultry farming. However, little is known about the prevalence and dynamics of this virus in the field. Commercial poultry farming is highly structured, and so important questions are, how does virus prevalence differ across this structure, and how does virus prevalence change within a single level of this structure over time? To answer these questions, virus prevalence across farms in Pennsylvania for three years was surveyed. This involved collecting dust samples from chicken houses and using a qPCR (quantitative polymerase chain reaction) assay specific for non-vaccine Marek’s disease virus to assess the virus’s concentration in the dust.

In total, 4448 samples were collected across 15 operations, and 106 farms. These data were analyzed with generalized linear mixed effects models fit using Bayesian methods. Virus prevalence varied considerably in the collected data. Substantial amounts of variation were attributable to between operation, between grower, and between flock effects. A smaller magnitude of variation was attributable to between house effects and between sample effects. Also, significant effects of cohort age and seasonality were identified. Researchers were unable to identify a significant effect of production type, but it is unclear whether this was due to a lack of biological importance or due to sampling constraints. Examining the data from within farms over time confirmed many of the patterns discovered by the mixed effect modeling. These data also revealed apparent patterns of virus disappearance and reemergence, where the virus concentration dropped to below detectable levels only to reappear in later samples. Whether this was due to repeated extinction and reintroduction events, or due to virus population dynamics that occurred below the qPCR limit of detection is still an open question.