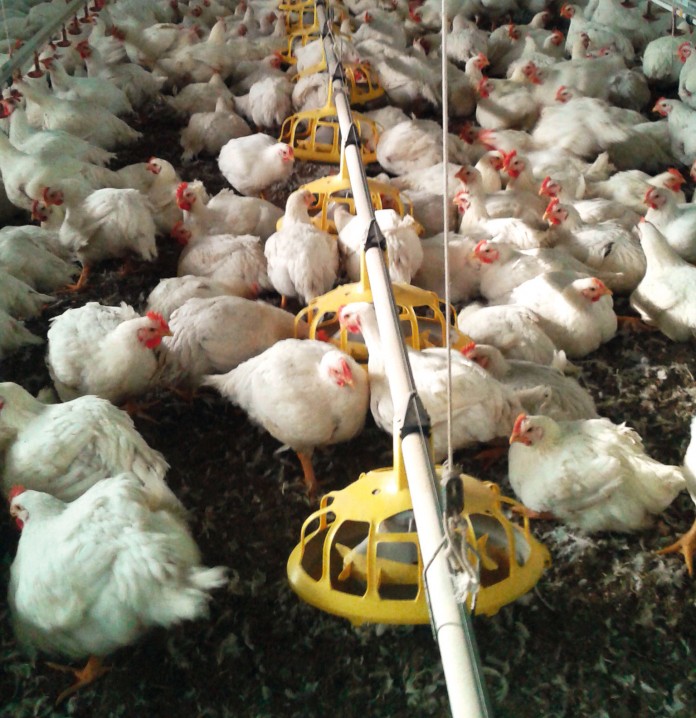 Recently we were invited by the renowned Belgian company Roxell to collate information from the two Italian growers who have decided to field test the new Roxell feeder designed for heavy weight broilers. This new feeding system has been specifically developed and designed for broilers weighing over 3kg. According to Mr. Ben Dehaeck, Broiler product manager of Roxell, this new feeder represents a major step forward for the American broiler market and also for the Italian marketplace. “To meet the specific requirements of broiler growers in these markets we have developed a feeder pan that responds perfectly to the increased feed intake required for heavier broilers particularly at the end of the growing cycle. A number of modifications to the existing ‘HaiKoo’ pan enableD the new pan to hold twice the amount of feed. Better access to feed gives better growth results”. The larger pan surface provides good feed distribution and is bird-comforting. In practice this feeding pan does give birds a good start. The unique grill, the pan depth and the anti-waste rim, all minimize feed waste. Broilers with a body weight over 3 kilograms bodyweight are grown principally in the United States but also in Italy, Germany and Poland. It was in Italy and the USA that Roxell decided to field test the new feeder before introducing it to the market.

“The new feeder was launched last January at the Atlanta IPPE. The tests we are currently running are with one grower in the United States and with two separate growers in Italy. The Italian growers were chosen with the help of the Tezza Company who are the exclusive distributor of the Roxell product range in Italy. The new feeder is now available after the field test results were examined and evaluated. The standard ‘HaiKoo’ feeder was launched almost ten years ago and has enjoyed great success internationally. On the back of this success we decided also to give attention to the heavy weight broiler market. The new feeder has a feed capacity of almost double that of the ‘HaiKoo’ feeder. We did however decide to retain the oval shape as this allows for the feeding of a superior number of birds at the start of the rearing cycle and above all does not have a limiting effect on the space available for the drinking water lines”, explained Mr Dehaeck.

The first farm visited was that of Mr Maurizio Spiazzi, a contract grower for Veronesi Company, which is located in Mezzane di Sotto in the province of Verona. Accompanied by Mr Ezio Benedetti from the Tezza Company and Mr Ben Dehaeck we met with Mr Pietro Spiazzi the nephew of the owner who gave us a brief explanation of the company’s agricultural history. “The business was started in the late 1960’s by my grandfather and was subsequently enlarged under the direction of my father. Today we have this broiler farm and a farm where we rear turkey breeding flocks which is also in the Verona region breeding stock”. The farm we visited consisted of 3 poultry sheds housing 39,000 heavyweight broilers. The new Roxell feeder was located in the smallest shed, which measured 90 x 6.20 metres and housed 10,000 Ross 308 broilers. Mr Pietro Spiazzi said: “This flock has started well and at two weeks of age weigh around 400 grams”. He further stated: “Mortality is low at around 1% for the males and 0.6% for the females. Flock density is 19 birds per square metre and we are seeing good results with the new feeder particularly as it allows for more feed being available in comparison to the existing ‘HaiKoo’ feeder. Our target is to send to the processors birds weighing around 4 kgs. Our average growing cycle is 55 to 57 days. We  consigned birds weighing 4 kg at 57 days with a feed conversion rate of 1.76 and an average weight for males and females of 2.6 to 2.7 kg. The females were consigned at 35 days with a weight of 1.6 kg. It was a good result, but health problems had an impact on the final results. In the second cycle the signs suggest that results will be better and it seems to me that this new feeder can be a useful tool towards the optimum management of a flock”.

The second farm visited is to be found at Agugliaro in the province of Vicenza and was managed by Mr Carlo Pacchin as a contract grower for the Amadori Company. Here we spoke with Mr Gabriele Albertini who is an Amadori technician and with Mr Pacchin who immediately demonstrated his total satisfaction with the new Roxell product.
“The new feeder right from the start seems more stable and robust. The first growing cycle went well and we are now anticipating the start of the second cycle. This farm is made up of 5 poultry sheds where we can house 58,100 Ross birds all males. In four of the sheds we use the Minimax feeder a Roxell product while in the fifth shed, the largest of the sheds we have installed the new feeder. In this shed we house 12,000 birds at a density of 13 birds per square metre. Of the 13 birds per square metre 10 are reared as heavyweights at 3.5 kg and 3 at medium weights of around 2.7 kg”.
Mr Albertini further commented: “The new feeder immediately gave good results and right from the start of the growing cycle we noted less feed wastage and low mortality. On many farms during the early rearing stage it is the practice to add additional feeding pans to encourage birds to feed here, however, we found that the birds needed no added stimulus as they commenced feeding using the new feeders without any problem. The feed conversion rate was 1.73 and the birds had an average processing weight of 3.2 kg. Their performance index, which is our internal company instrument for measuring whether a flock has done well or otherwise and is based on parameters such as average slaughter age; mortality; average weight etc., showed a result of 394 which is very good as the maximum score is 400. We therefore are very satisfied and consider this new feeder functional as it does not require additional manpower, there is no feed waste and feed conversion results were good”. “The choice of these two field test farms was well thought through”, concluded Mr Ezio Benedetti. “We considered it correct to trust the testing of this important product to two growers who both have great experience and professionalism”.

The testing of this new Roxell product is almost finished. The Belgian company’s principal desire was to have the opinion of individual growers who by running the field tests can identify the product’s strengths and weaknesses. Only after these have studied and appropriately acted on the various trial result findings the Roxell Company will move forward.