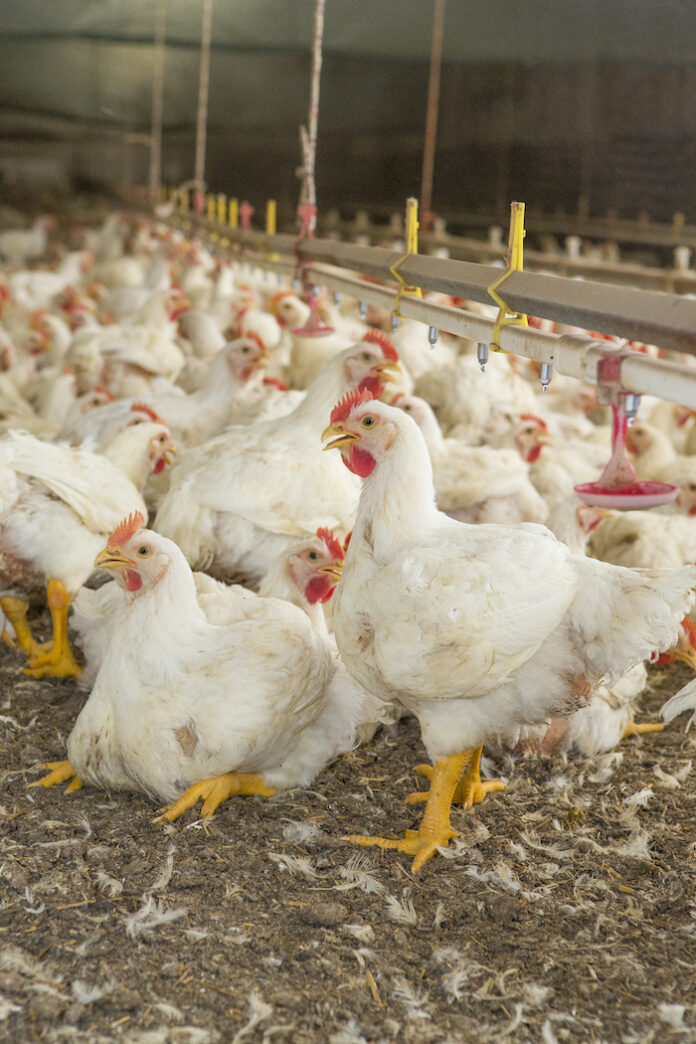 In June 2021, FAO published an update on global trade data for 2019. This makes it possible to present an overview on the patterns and dynamics of global egg and poultry meat trade. In a first paper (Zootecnica International 2/2021), egg trade was analysed, the second paper will deal with poultry meat trade, a third will focus on chicken and turkey meat.

Patterns of poultry meat production at global and continent level

A short overview on the development of global poultry meat production between 2009 and 2019 and the share of the continents will be given to better understand the following analysis of the dynamics and patterns of poultry meat trade. 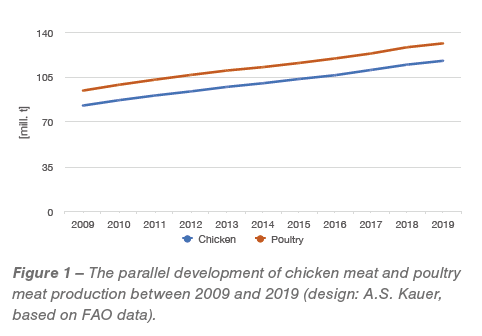 Figure 2 documents the high regional concentration in production. Asia contributed 37.8% to the global production volume, followed Central and South America with 20.7% and North America with 18.5%. 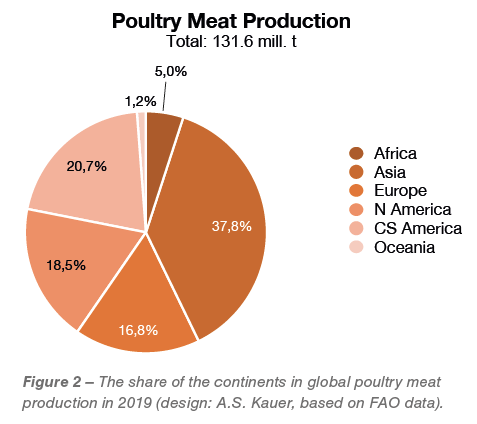 In 2019, almost 20 mill. t or 15.2% of the global poultry meat production was exported. Table 1 documents the situation at continent level. The highest share showed Europe with 36.8%. It has to be considered that the high percentage is a result of the inclusion of the intra-EU (27) trade. North and Central and South America exported almost the same percentage of their production. The export share in Asia was much lower with 6.3% because of the high domestic demand in most countries. Only a few countries, for example Thailand, were able to export because of the surplus of production over domestic consumption. 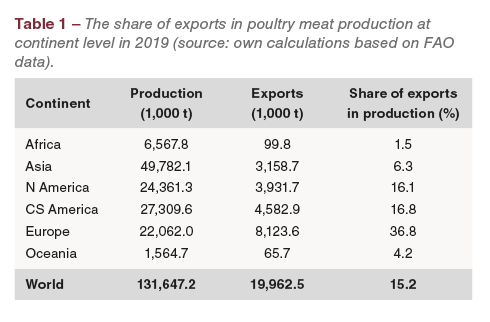 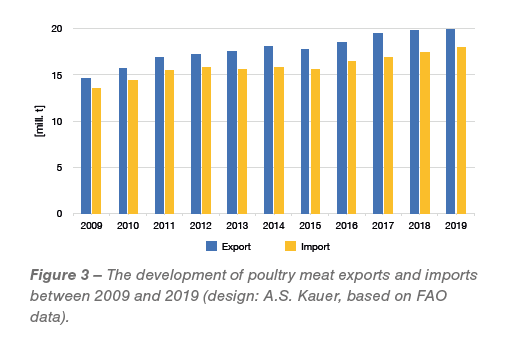 An analysis of the continent’s share in poultry meat exports and imports reveals remarkable differences (Figure 4). In exports, Europe and the Americas together contributed 83.4% to the global export volume, Europe alone 40.7%. The value includes the considerable intra-EU (27) trade. The high shares of North as well as Central and South America are due to the leading chicken meat exporting countries Brazil and the USA. 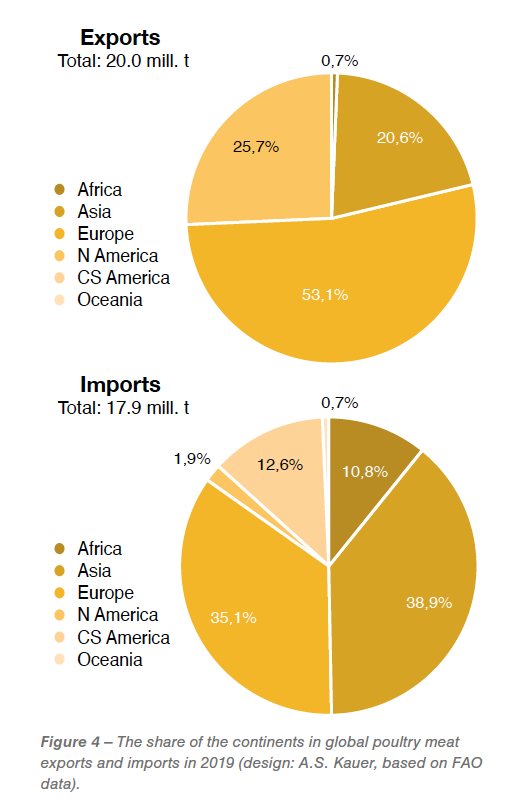 The pattern of poultry meat imports differs considerably from that of exports. With a share of 38.9%, Asia ranked in first place, followed by Europe with 35.1%. Together these two continents shared 74.0% in the global import volume. It is worth noting that North America played only a minor role in imports, different from Central and South America. A closer look at the situation at country level will show that Mexico was one of the leading poultry meat importing countries in 2019. 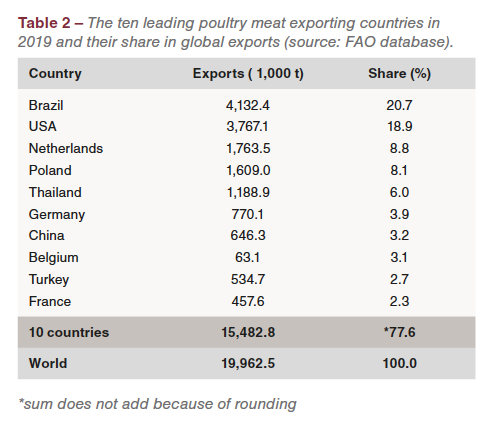 For years, the USA had been the leading poultry meat exporting country before they were surpassed by Brazil in 2015. It is worth noting that of the ten leading countries five were members of the EU (27). A remarkable growth of their export volumes in the analysed decade showed Poland and Turkey. Poland’s exports increased from 350,000 t in 2009 to 1.6 mill. t in 2019 or by 360%, a result of the fast expansion of production, partly financed by foreign capital. Poland’s exports decreased by about 7% in 2020 due to the impacts of the Avian Influenza outbreaks from 2019 on (Smietanka et al. 2020), causing import stops by several countries. In addition, the Covid-19 pandemic reduced the domestic demand as well as the exports to several EU member countries. Turkey’s export volume grew by almost 420,000 t and reached 535,000 t in 2019, an increase by 360%, too. The main countries of destination were Islamic countries in Western Asia.

The regional concentration in poultry meat imports was much lower than in exports as can be seen from the data in Table 3. The ten leading poultry-meat importing countries shared only 48.1% in the global import volume. This indicates that many countries were not able to meet the growing demand by domestic production. 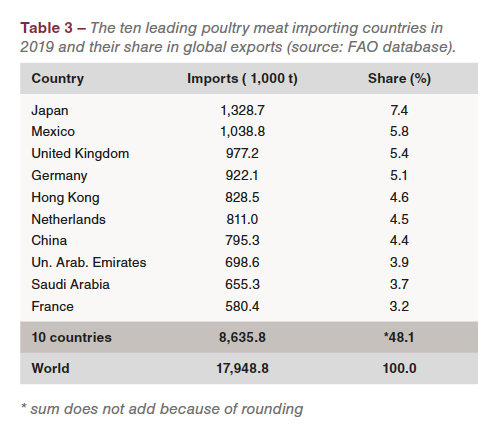 A closer look at the composition and ranking of the ten leading countries reveals some interesting insights. Japan and Mexico ranked in the two top positions, both imported over 1 mill. t of poultry meat in 2019. The per capita consumption in these countries differed considerably, however. While in Mexico the per capita consumption of poultry meat was as high as 34 kg, it reached only 14 kg in Japan. Poultry meat and eggs are the main protein source for the Mexican population while in Japan poultry meat is not highly valued because of its low fat content. The ranking of the two EU (27) member countries, Germany and the Netherlands, is surprising at first sight. Both countries imported high-value products, such as breast filets, and besides high-value products exported large amounts of low-value products such as wings and legs, which could only be sold in small amounts in their domestic markets. Besides Eastern Asia, Islamic countries in Western Asia were important markets. Saudi Arabia and the United Arab. Emirates invested extensive amounts of capital, however, to increase their domestic production of broiler meat and reduce their dependence on imports.

Between 2009 and 2019, poultry meat was the fasted growing meat type. Production increased by 37 mill. t or 39%. In 2019, 15.2% of the production was exported, mainly from European countries and countries in the Americas. The regional patterns of exports and imports at continent level differed considerably. In exports, Europe was in the leading position, followed by Central and South America; in imports, Asia and Europe ranked in the top two positions. The regional concentration at country level was much higher in exports than in imports. While only a limited number of countries showed a high surplus over their consumption, a larger number of countries was not able to meet the growing demand by domestic production. This explains the comparatively high share of the export volume in global production.

According to the FAO-OECD Agricultural Outlook, global poultry meat consumption will increase by about 15 mill. t between 2020 and 2030, and reach a volume of 136 mill. t. To this, Asia will contribute 7 mill. t, Central and South America 2.7 mill. t, Africa 2 mill. t, North America 1.2 mill. t and Europe 1 mill. t. Brazil, the USA and several EU (27) member countries will profit most from this dynamics and strengthen their positions in poultry meat trade.

Patterns and dynamics of egg trade: trade flows in exports and...