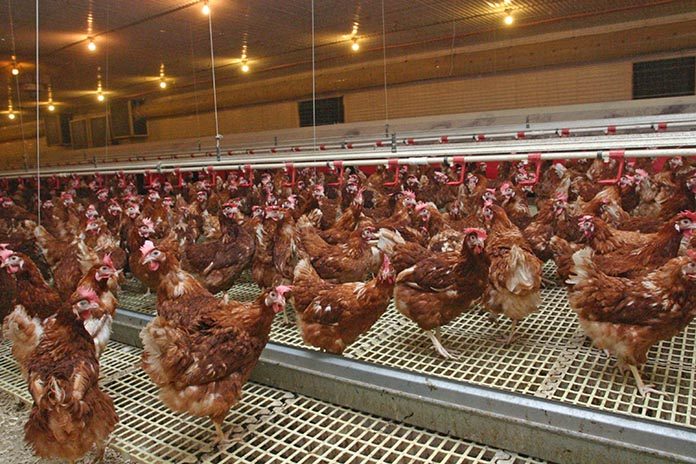 The U. S. poultry industry is confronted with new challenges which ask for a reaction. One challenge is the growing demand for cage-free eggs, the other, the increasing number of food retailers and restaurants to use or sell only meat from slow-growing broilers by 2024.
The egg industry in the northern Midwest has not yet fully recovered from the Avian Influenza outbreaks in 2015 and forced them to implement cost-intensive new bio-security strategies. The transformation from conventional cages to alternative non-cage housing systems will not only cost about 10 billion US-$ but can also lead to severe economic problems if the process will develop uncoordinated. The broiler industry was not affected by the AI outbreaks in 2015, a few cases in Kentucky and Alabama in early 2017 could be confined to a small area. The announcement of several food retailers, food producers and restaurants in early 2017 to switch to meat from slow-growing broilers has caught them rather unprepared, however. In this paper, an overview will be presented on the present situation and the future perspectives.

Cage-free – the new magic word
When California decided by ballot in 2008 to prohibit conventional cages from 2015 on and also the selling of eggs from this housing system, several egg producers either transformed their hen houses to a colony nest system or built new non-cage farms. Most of the non-cage farms were built in adjacent states to supply the California market.
Between 2010 and March 2017, the inventory of hens kept in cage-free systems increased from 12.2 mill. to 39.9 mill. birds. This equals 12.7 % of the total laying hen inventory. Of the 39.9 mill hens 13.9 mill. are kept in organic production systems. Besides California, several other states will also ban conventional cages between 2020 and 2025. These initiatives will be, however, of minor importance because of the announcements of 219 grocery stores and food companies to no longer list or use eggs produced in conventional cages.
For the future development of the egg industry in the USA it is of particular interest which grocery stores and companies request which amount of cage-free eggs at what date. In Table 1, the projected demand of cage-free eggs in 2025 is documented. Grocery stores will request 46.9 billion eggs which equals 76 % of the total projected demand, followed by restaurants, foodservice and food manufacturers. In total 223.7 mill. laying hens, or 71.3 % of the 2017 laying hen inventory, will be needed in 2025 to produce these eggs. It is obvious that the grocery stores and restaurants will play a decisive role in the transformation process.

In a presentation at the Business Conference of the International Egg Commission (IEC) in Monaco in early April 2017, Chad Gregory, president of the United Egg Producers, declared that the present situation could only be described as “a mess” and that he was afraid that things might even become worse over the next years.

Which are the main problems that obviously prevent a coordinated transformation?
In contrast to the EU, where directive 1999/74/EC was a compulsory legal basis for the egg industry, defining as well the permitted future housing systems as the date by which conventional cages were no longer allowed, no such directives or bills exist in the USA. Presently, several non-cage systems have been or will be installed but it is a still open question if these systems will be accepted by the leading food retailers and restaurants as “cage-free”. Another problem which impedes the decision of the egg industry to switch to cage-free housing systems is the fact that the companies announced that they will no longer sell or use eggs produced in conventional cages by 2025, but they did not announce how many cage-free eggs they want to be delivered at which date. In some announcements the companies leave the door open for further negotiations depending, as they declare, on the price development for eggs and the consumer behaviour. This makes it complicated for the egg industry to develop a strategic time table for the transformation of their housing systems.

A major problem is also the lacking experience of farm managers and employees with non-cage systems. Higher mortality rates and less marketable eggs reduce the profitability. A lot of educational work will be necessary to reach a European standard.
Another problem has already become obvious. The construction of large non-cage complexes with millions of layers has led to a sharp increase of the laying hen inventory and of egg production (Table 2). This will lead to lasting low egg prices if the surplus cannot be exported as shell eggs or as egg products.

From the experience in the EU one can expect that many egg producers will wait with the transformation as long as possible. This may then result in a shortage of cage-free eggs and problems in the availability of the necessary equipment for the new housing systems.
Until the ballot in California in 2008 most of the egg producers were of the opinion that a banning of conventional cages similar to the EU would never happen in the USA. Things have changed, however, completely within a few years. It will not be necessary to pass a bill which prohibits conventional cages, as was planned with the Egg Bill of 2013, which did not pass Congress. The decision how eggs will be produced in future has already been made by the grocery stores and food companies. The egg producers can either quit producing eggs or switch to alternative housing systems.

These standards demand the use certain breeds with limited weight gain per day, sufficient space for the chickens to express their natural behaviour, enrichments in the confined houses (liter, straw bales etc.) and controlled atmospheric stunning prior to slaughter.
In 2016, already nine companies declared that they would transit their broiler supply following these standards by 2024. In the first quarter of 2017 18 more companies announced that they will only use or sell meat from slower-growing broilers by 2024.
As was to be expected, other animal rights organisations supported their decision, such as Mercy for Animals and the Humane Society of the United States, and appealed to other foodservice companies, restaurants and grocery stores to join them.
With the exception of Applegate Farms, a subsidiary of Hormel Foods, no other broiler companies announced that they would switch to slower-growing breeds and the standards of Global Animal Partnership.

Why have the animal rights organisations been so successful? At the Animal Agriculture Alliance Stakeholder Summit 2017 (Kansas City, Missouri) Ken Opengart (Keystone Foods) and Matt Salois (Elanco Animal Health) summarised the strategy of the animal rights activists as follows: “They operate with the large numbers of broilers, use easy to understand words, play on the people´s emotions and force the companies to develop new brands for such broiler meat or meals”.
It can be expected that these activities will develop their own dynamics and finally reach a similar result as in laying hen husbandry. The broiler industry should not underestimate the recent trend. The share of slower-growing broilers in the Netherlands, France and the United Kingdom document that consumers are willing to pay more for these broilers once they are informed about the ways these broilers are raised and the improved animal welfare.

Summary
The preceding analysis could document that the U. S. poultry industry thoroughly misjudged the success of animal rights organisations until 2008. After the ballot in California, their activities developed their own dynamics. The United Egg Producers tried in vain to pass an Egg Bill in Congress in 2013 which was also supported by the Humane Society of the United States. Lobbyists from the cattle and swine industries were able to stop this initiative. But then the leading grocery stores, restaurants and food manufacturers took over the initiative announcing that they would no longer sell or use eggs produced in conventional cages and that they would switch to cage-free eggs. A bill was no longer needed and the egg producers have no choice, they can either quit egg production or transit to other housing systems within the next years. Their arguments do not count any longer. A similar dynamic can be observed presently in broiler production. Here, too, the campaigns of the animal right organisations have been very successful so far.
Even though the number of companies which announced a transit to slower-growing broilers is still much smaller than in in egg production, it can be expected that it will grow fast within a few years and challenge the broiler industry to react.