According to R.I. Charipov, President of the Union of Poultry Farmers of Kazakhstan, investments and modernization of the farms will provide more poultry and eggs to the domestic markets, while boosting the poultry exports.

Could you present in a few words poultry production in Kazakhstan?

Currently, there are 67 large and small poultry farms in the Republic of Kazakhstan, of which 35 are for egg, 25 for meat and 7 for breeding (Table 1).

In 2020, the decrease in the number of poultry is associated with the aggravated epizootic situation (outbreaks of bird flu), the loss of poultry amounted about 2 million heads. During the outbreak of bird flu, egg poultry farms were mainly affected. Regarding the production of poultry meat, it increases annually due to the expansion, modernization and new introduced poultry farms (Table 2). 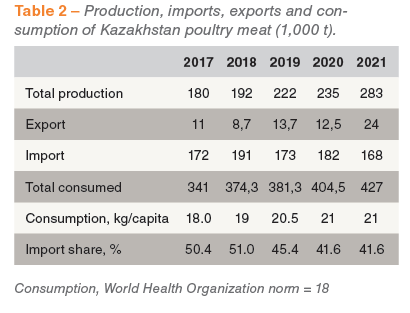 What about poultry meat market (production, imports and exports)?

Due to the increase in production, the share of poultry meat imports in the domestic market is steadily decreasing, passing from 55% in 2019 to 41,6% in 2021.

By 2027, imports will drop to only 50,000 tons for socially vulnerable segments of the population.

Production per capita in 2020 in the whole country amounted to 12.6 kg/person, while consumption is over 21 kg/person. By 2027, we plan to increase consumption to 31 kg/capita, which once again indicates the need to increase our own production capacities and stimulate production growth.

What about egg market? 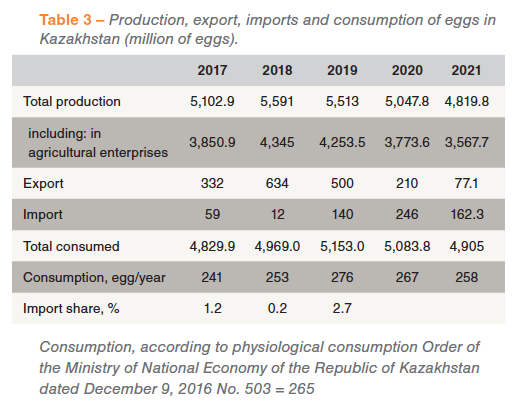 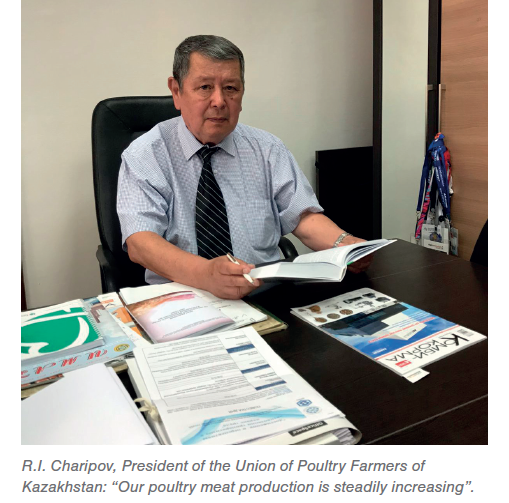 What are the actual main issues of Kazakhstan poultry production?

However, the Ministry of Agriculture of the Republic of Kazakhstan has developed a program for the development of the agro-industrial complex for 2021-2025.

The goal of the program is to multiply the production of the agro-industrial complex by two and a half times, to double its exports and to provide domestically produced socially significant food products

Today, a roadmap for Poultry Farming is also being developed to bring solutions to these main issues. No doubt that the next Kazakhstan International Poultry Farmers Forum will also help to answer to these numerous issues.