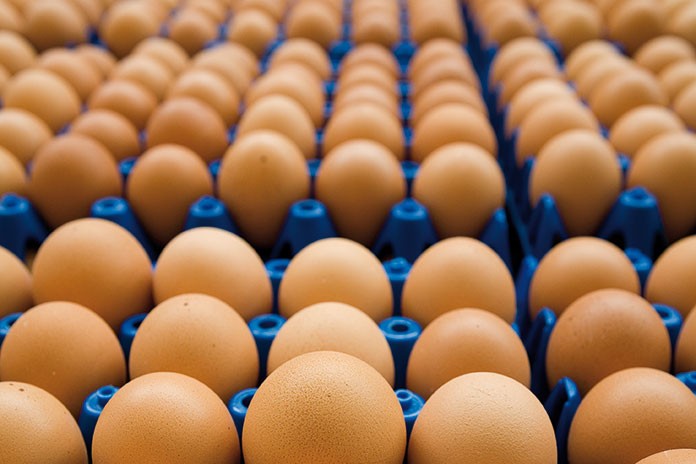 About ten years after the collapse of the USSR and COMECON and the implementation of a new political and economic system a new phase of the Polish poultry industry began. Since 2003 egg exports have been increasing. In 2013, Poland already ranked in third place among the leading egg exporting countries behind the Netherlands and Turkey.
In this paper, the dynamics of egg production and egg trade will be analysed in detail.

Dynamics in laying hen husbandry and egg production
Between 2010 and 2015, the number of laying hen places increased from 32.8 mill. to 41.9 mill. or by 27.8 %. Table 1 shows that in 2011 the laying hen places decreased because of the implementation of alternative housing systems as required by the EU directive 1999/74. From 2012 on, a continuous increase can be observed and in 2015 the number of installed places was 28 % higher than in 2010. Assuming an average use of 85 % of the installed places, about 34.8 mill. laying hens were in production in 2015.

From the data in Table 1 one can also see that the development of egg production reflects the dynamics in the laying hen places. The production volume decreased between 2010 and 2012 because of the transformation of the farms with conventional cages to alternative housing systems and the construction of new farms. Obviously, not all hen places were occupied in the beginning, but from 2012 on production grew continuously. In 2015, a production volume of 593.000 t was reached, contributing 7.9 % to the total EU production. However, production was still about 7 % lower than in 2010.
Figure 1 shows the spatial distribution of layer places in 2015. It is worth mentioning that the spatial pattern is rather homogeneous with the exception of clusters close to the major urban areas. This distribution is remarkable because of the increasing exports to Germany and the decision of the food retailers in Germany not to list eggs with a printing “3” (cage eggs).

The dynamics in egg trade
It was already mentioned that Poland ranks as number three among the leading egg exporting countries behind the Netherlands and Turkey and with an export volume of 234.450 t contributed 11 % to global egg exports in 2015.

The data in Table 3 shows that the export volume increased by 77,151 t or 49.0 % in the analysed time period. With the exception of 2014, when a slight decrease occurred, exports grew continuously. Imports fell between 2010 and 2012 because of the decreasing per capita consumption but increased again until 2014. Despite the growth of the per capita consumption, imports fell by another 6,200 t, a result of the remarkable growth rates of the production volume. In total, imports were about 10 % lower in 2015 than in 2010. The consequence was a remarkable growth of the export surplus by 57.1% A closer analysis of the dynamics at country base reveals some remarkable results (Table 4).

Because of the banning of conventional cages as early as 2010, Germany´s egg imports increased very fast. Poland was one of the countries which profited from this demand. But when the German egg industry recovered faster than expected and imports decreased considerably until 2014, Poland and Spain were mainly affected. It was not before 2015 that exports to Germany increased again. Poland´s exports to the Netherlands grew also very fast between 2010 and 2014. Because of the high export volume to Germany, demand of eggs for further processing increased considerably in the Netherlands. But when Germany´s imports fell, the Dutch demand for eggs sank again which resulted in decreasing imports from Poland. A similar dynamics showed the exports to Italy. To compensate the fluctuations, exports to the Czech Republic were either reduced or increased.
The growing importance of German egg imports for Poland can be seen from Table 5. Between 2010 and 2012 imports from Poland grew by 326 mill. pieces. In the following year, they fell by 239 mill. pieces because of the recovery of the German egg industry. From 2014 on they increased again and reached almost 1.2 billion eggs in 2015. Since 2013, the share of Polish exports to Germany increased by 5.4 % and reached 17.9 % in 2015. A comparison with the dynamics of egg imports from the Netherlands shows that they were also affected but to a much lesser degree than France and in particular Spain. Germany´s imports from Spain decreased by almost 90 % between 2010 and 2015.

Perspectives
The preceding analysis could show the remarkable dynamics of the Polish egg industry between 2010 and 2015. The laying hen inventory increased considerably, egg production was, however, still lower than in 2010. This may be a result of the alternative housing systems in which lower laying rates were achieved compared to the former conventional cages. Exports increased by almost 50 %, a result of the lower per capita consumption because of the high retail prices for shell eggs. The most recent development indicates a recovery, however.
For the Polish egg producers, Germany has become the most important country of destination besides the Netherlands and Italy. It can be expected that Poland will become even more important as a country of origin for the German egg imports. According to the Author it can also be expected that Poland will increase its production volume in the years to come and also its exports. This trend could be stopped, however, if the domestic demand would increase considerably within in a short time.

Data sources and additional references are available on request