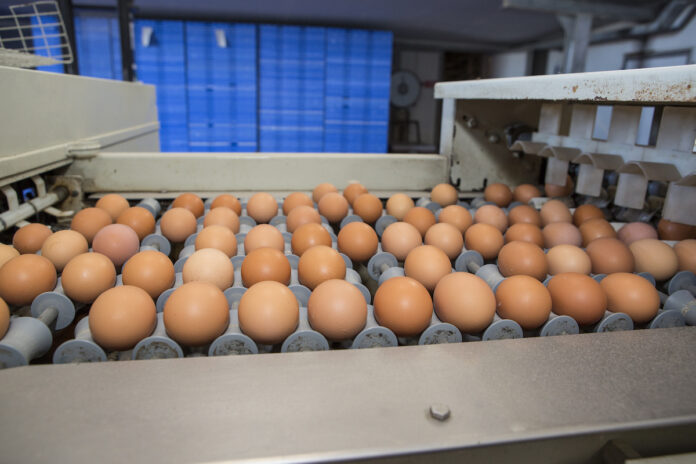 The boundaries of the Middle East Region are not exactly defined. Under the term Near East, it was used in the late decades of the 19th century mainly under strategic aspects within the British Commonwealth. In the beginning of the 20th century, the term was replaced by Middle East.

Presently 17 countries belong to the region. In most countries, Arabic is the official language, but Persian, Turkish and Hebrew are official languages in Iran, Turkey and Israel. In 2020, 453 million people lived in the 17 countries, 5.7% of the global population. The economic power of the countries differs considerably. The highest per capita Gross Domestic Product in 2020 had Qatar with 52,146 US-$, followed by Israel with 43,698 US-$ and the United Arab Emirates with 31,982 US-$, the lowest Yemen with only 620 US-$. Before oil and gas resources were developed, the economic power of most countries was very low, but with the exploitation of the huge resources, the economic and political power and influence of the countries, which had access to the resources, grew considerably. The political situation within the region has been very unstable for decades. Religious differences and the geopolitical interests of the USA, Russia and China are the main steering factors behind the lasting military conflicts. Despite these problems, the poultry industry played an important role.

In two papers, the patterns of the egg and poultry meat industries will be analysed. The 17 MEA countries shared 3.7% of the global laying hen inventory and 4.0% of global egg production. Their role in global egg trade was even more important. In 2020, they contributed 11.5% to the global egg exports and shared 15.8% in imports. The specific climatic situation, which limits the production of poultry feed, explains their remarkable role in egg trade. In the second paper, patterns of the poultry meat production and trade will be analysed.

In 2020, 301.3 mill. laying hens or 3.7% of the global inventory were kept in the 17 MEA countries. The regional concentration was very high as is documented in Figure 1. Turkey ranked in an unchallenged first position with a share of 40.7% in the total inventory of the region, followed by Iran, Egypt and Saudi Arabia; the four countries together contributed 80.1%. Layer flocks were smallest in Qatar and Bahrain (Table 1). 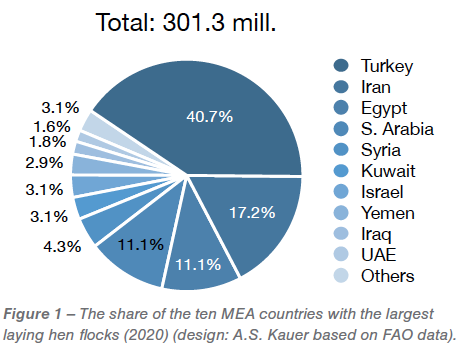 The ranking of the countries according to their egg production reflects, as was to be expected, that of the laying hen inventories (Figure 2). There is one deviation, however, Israel. Israel’s production is much higher than that of Kuwait despite their almost identical inventories. Obviously, there is a statistical error for Jordan, as the production volume is incorrect in the database. In 2020, the average laying rate in Israel was 267eggs per hen and year. In Turkey and Egypt, the efficiency was considerably lower with 167 egg respectively 215 eggs. While in Israel only hybrid hens were kept in battery systems, in most other countries beside such efficient breeds and housing systems, small backyard flocks with regional breeds were also in production. A comparison of the countries’ shares in the total laying hen inventory and in egg production reveals the differences in the efficiency of the production systems. 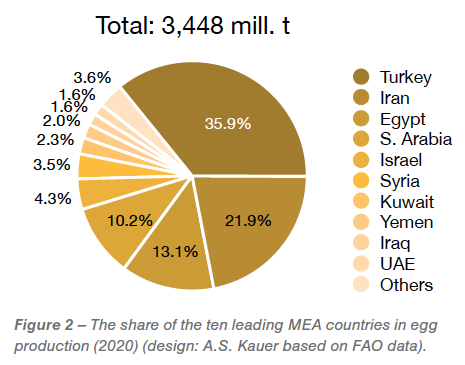 Insufficient production in comparison to demand in most countries

A comparison of egg production and egg trade at country level reveals (Table 1) that with the exception of Turkey and Iran all other MEA countries were not able to meet the domestic demand and had to import eggs. 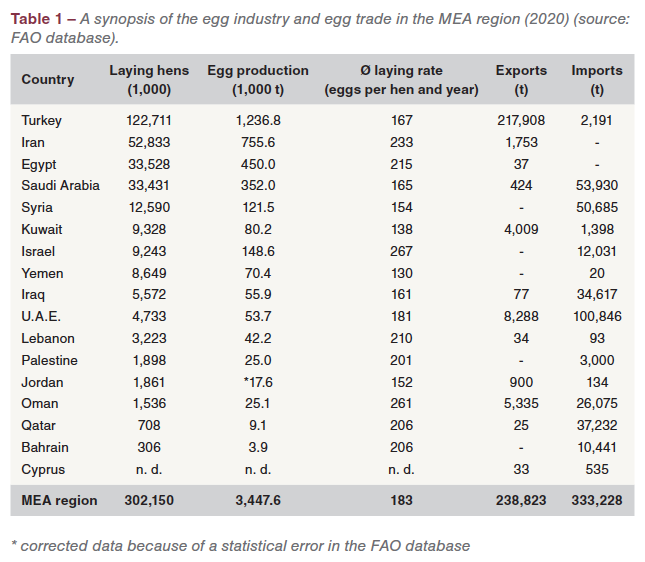 Turkey has become one of the leading egg exporting countries over the past decade and in 2020 ranked in second place behind the Netherlands with a share of 10.5% in the global export volume. The United Arab Emirates and Oman export some of their imports to other countries in the region. The highest supply deficits in 2020 showed the United Arab Emirates, Saudi Arabia, Syria, Qatar, Iraq and Oman. In these countries, eggs are of growing importance in the supply of the population with high-quality proteins. A closer analysis of the patterns of poultry meat production and trade will reveal a similar situation. As no religious barriers prohibit the consumption of eggs and poultry meat, these two items are playing an important role not only in production and consumption but also in trade.

For selected countries, the trade flows of egg exports and imports will be analysed in detail. As mentioned before, Turkey ranked in second place behind the Netherlands in global egg exports. In 2020, the country exported almost 218,000 t to 41 countries. Figure 3 documents that four countries received 68.9% of the overall exports, with Syria in an unchallenged first position. It is worth noting that the ten leading countries of destination were all Islamic countries. Obviously, beside religion, distance played an important role. All major importing countries could be reached via truck transport, an important steering factor as eggs cannot be deep-frozen and have a relatively short shelf life. 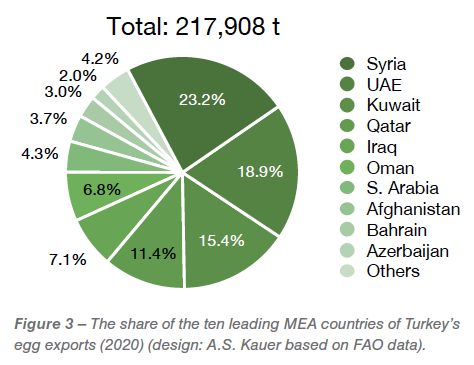 In 2020, the United Arab Emirates ranked in seventh place among the leading egg importing countries with a share of 4.7% of the global imports. With over 100,000 t, the Emirates shared 29.8% in the overall import volume of the MEA region. Table 2 documents that Turkey and the Ukraine were the two leading countries of origin with a contribution of together 82.1%, followed by the USA and Russia. Transportation distance obviously played an important role in the spatial pattern of the trade flow. 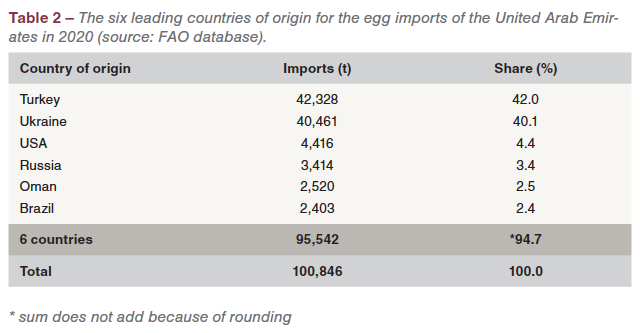 Saudi Arabia’s trade pattern differs from that of the United Arab Emirates despite the fact that Ukraine and Turkey are the two leading countries of origin. In contrast, four EU (27) member countries rank in third to sixths place, sharing together 28.8% of the overall import volume (Table 3). 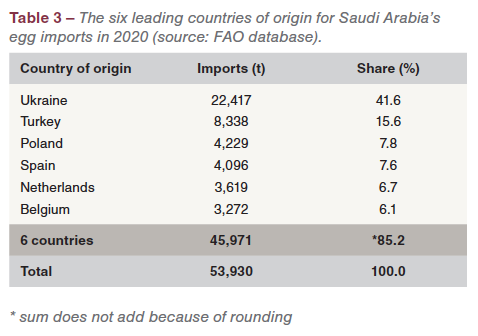 The pattern of Israel’s egg imports reflects the political tension with the adjacent Islamic countries. Despite the shorter transportation distance, Turkey does not export eggs to Israel. Table 4 shows that with the exception of Ukraine, EU (27) member countries and the USA were the leading countries of origin, countries with close political relations. 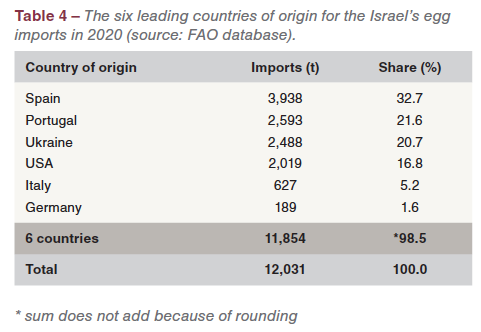 The preceding analysis documented the patterns of laying hen husbandry, egg production and egg trade in the MEA region. The regional concentration as well in the laying hen inventory as in egg production was very high. Four countries dominate the egg industry, Turkey, Iran, Egypt and Saudi Arabia. With the exception of Turkey, Iran and Egypt all other countries could not meet the growing demand by domestic production and had to import eggs. Only Turkey played an important role in egg exports. The United Arab Emirates, Saudi Arabia, Syria, Qatar, Iraq and Oman were the leading egg importing countries. Most of the eggs were traded within the MEA region, only Ukraine and some EU (27) member countries imported eggs into the region. Because of the lasting political and military conflicts between Israel and several Islamic countries, Israel holds a special position in the trade patterns.

The egg deficit in the MEA region will increase in future because of a fast growing population and a higher purchasing power of a widening middle class. Even though Turkey will remain the main egg supplier beside Ukraine, new markets may develop for some EU (27) member countries.