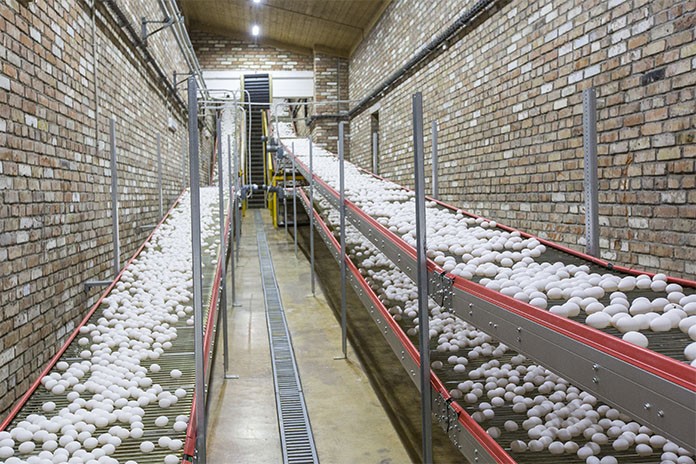 The region Krasnoyarsk is Russia’s second largest Federal State and is located mainly in the eastern part of Siberia, in the river basin of the Yenisei. The length of the area from the north to the mountains of southern Siberia is 3000 km.
Thanks to the variety of natural landscapes, the region Krasnoyarsk is home to a number of unique places: mountain peaks, waterfalls, a large number of lakes and healing water springs, unique caves and plateaus, kilometers of untouched Siberian taiga and habitat of various species of wildlife. In such a picturesque place of the region Krasnoyarsk, the urban village Emelyanovo – administrative centre of the district with the same name, is located along the Kacha river.
The PLC Zarya poultry farm is the most important company in the village of Emelyanovo. For 57 years the company has supplied the inhabitants of the region and of the city Krasnoyarsk, one of the largest cities of Siberia and of the Far East, with eggs and chicken meat.
The poultry farm was founded in 1960 on the basis of a state-owned farm in the region of Krasnoyarsk. At that time, the farm was very small and all laying hens were kept in floor management systems in small houses. Very low productivity, bad feed supply, lack of modern technology, were responsible of the production of only 40 to 50,000 eggs per day.
From this point on till today, the farm has gone through many changes, many things have happened, but there have also been hard times. Particularly the years 2001-2003 were difficult for the poultry farm, and due to mismanagement and financial problems, the farm was on the brink of dissolution. Everything changed for the better in 2004, when AG “Nazarovo”, one of the best agricultural farms in Russia, became the sole partner and investor of the farm.
At the same time, Igor Valerevich Isaev, a talented young manager, doctor of economics, was appointed farm manager. He was the author of the strategy of further development of the company.
Under his leadership and with his direct participation, in 2009 the large-scale modernization of the farm started and till today it has not been completed yet.
Even before the start of the modernization of the farm, the management realized that without modern equipment, it would not be possible to obtain a high-quality production level.
Igor Valerjevitch remembers the musings at the time: “After careful market research, the choice was made in favour of the brand Specht, and since then there have never been any doubts about the correctness of this selection. Impeccable German quality, high reliability and longevity are characteristics of the products of the Specht brand”. Nowadays all laying hens on the farm are kept in the houses, which are equipped with “Specht” batteries. All technical professionals and experts of the poultry farm appreciate the personalized support of the supplier and the always-timely deliveries of spare parts and accessories. The management of Specht visited the farm again and again to personally examine the performance of the equipment and to listen to proposals for further successful cooperation.
Of course, the farm has not only bought new poultry batteries during the development phase. In view of the great importance of the highly productive parent stock, for 10 years the farm has been receiving the one day-old chicks for their own parent stock rearing farm from the Dutch company Hendrix Genetics B.V., which is one of the most important prerequisites for the high productivity of laying hen flocks in the future.

In addition, in 2013 a new Moba – 500 egg grading machine with a capacity of 180 thousand eggs per hour was put into operation. In this way, consumers only receive products of the highest quality that meet all modern requirements.
The experts of the poultry farm are professionals with many years of experience, who not only understand their handicraft but also treat the animals with much love. Especially large attention is given to further education of highly qualified personnel. Every year the experts of the Zarja farm visit the companies Ten Elsen Specht and Hendrix Genetics B.V. to improve their knowledge and become acquainted with the latest developments in the poultry industry. The specialists of these companies also regularly visit the farm for professional advice. As an interim result of the ongoing modernization of the farm Zarja was the transformation of the company into one of the best Russian poultry farms. At the moment, there is 1 million laying hens and 360,000 young hens in the farm. A total of 235 million eggs were produced on the farm in 2016. The productivity reached 343 eggs per laying hen, and the daily egg production exceeded 800,000 eggs. After the obvious success, the management of the farm will definitely not sit back and rest now.
For the near future their plans are to increase the number of laying hens up to 1 million 600 thousand with a daily production of 1 million 300 thousand eggs. All this ensures that the poultry farm Zarja will strengthen their position as a market leader in the egg production among the poultry farms of Siberia and the Far East Russia.