A short overview on the development of global chicken and turkey meat production between 2009 and 2019 and the share of the continents will be given to better understand the following analysis of the dynamics and patterns of poultry meat trade. Between 2009 and 2019, global chicken meat production increased from 83.0 mill. t to 118.0 mill. t or by 42.2%. Asia contributed 36.3% to the global production volume, followed Central and South America with 22.5% and North America with 18.2% (Figure 1). 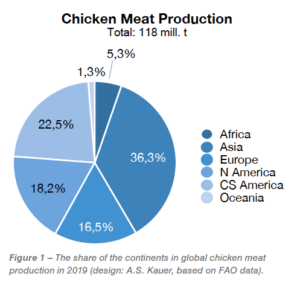 In 2019, almost 14.6 mill. t or 12.3% of the global chicken meat production was exported. Table 1 documents the situation at continent level. The highest share showed Europe with 26.2%. It has to be considered that the high percentage is a result of the inclusion of the intra-EU (27) trade. Both, North and Central and South America exported almost the same percentage of their production. The export share in Asia was much lower with 3.7% because of the high domestic demand in most countries. Only a few countries, for example Thailand, were able to export because of the surplus of production over their domestic consumption. Global turkey meat production grew from 5.4 mill. t to 6.0 mill. t or by 11.2% in the analysed decade. North America contributed 46.6% to the global production volume, followed by Europe with 33.9%, and Central and South America with 12.6%. In the other continents, turkey meat only played a minor role. The highest share of turkey meat exports in production showed Europe with 28.1%, followed by Asia with 14.5%. The share in Asia is surprising, considering the low production and per capita consumption. The only major exporting country was Turkey, focused on the Islamic countries in Western Asia. 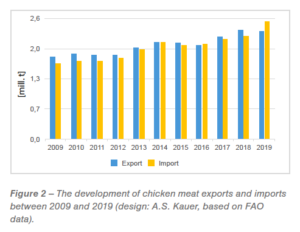 Chicken meat showed a considerable increase of its export volume between 2009 and 2019. It grew by 3.8 mill. t or 35.0% in the analysed time-period. Figure 2 documents that the continuous upward trend was only interrupted in 2015 because of the global financial crisis and the Avian Influenza outbreak in the USA. From 2016 on, exports recovered very fast, a consequence of the increasing demand in many countries. 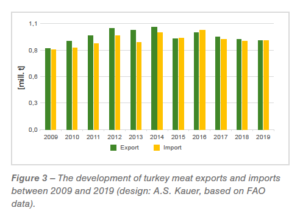 Figure 3 shows that, in contrast, turkey meat exports and imports fluctuated considerably. The upward trend also came to a halt in 2015. Despite a short recovery in 2016, the downward trend began again in 2017. Imports showed the same pattern. Obviously, turkey meat has lost consumer acceptance in North America as well as in Europe. In the USA, per capita consumption has been decreasing from the middle of the past decade and more or less reached a plateau in the EU (27).

As no religious barriers prohibit the consumption of poultry meat, the commodity was traded worldwide. Nevertheless, remarkable differences existed in the regional trade patterns. 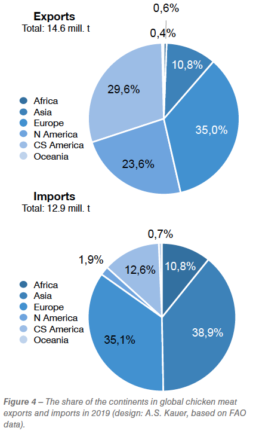 Figure 4 documents the differences in the regional export and import patterns at continent level. In exports, Europe was in the top position with a share of 35.1%, followed by Central and South America with 29.7% and North America with 23.6%. Despite the high production, only a few Asian countries exported chicken meat. The increasing domestic demand and the population growth caused a supply deficit in several countries as will be shown in a later part of this analysis. This is reflected in the share of 38.9% of Asian countries in global chicken meat imports. Europe ranked in second place with 35.1%. Together, the two continents imported almost three quarters of the chicken meat that reaches the global market. The high imports of Central and South America are surprising at first sight, but the analysis at country level will reveal that Mexico’s imports were responsible for the ranking. 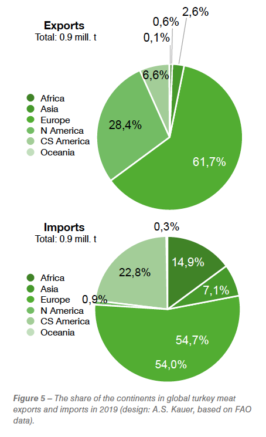 The regional patterns of turkey meat exports and imports differs considerably from that in chicken meat. Figure 5 shows that turkey meat exports were dominated by European countries, sharing 61.7% of the global export volume. North America ranked in second place with 28.4%, followed by Central and South America with 6.6%. In imports, Europe was also in the top position, sharing 54.0% of the total import volume, followed by Central and South America with 22.8% and Africa with 14.9%. The detailed analysis at country level will identify the leading importing countries. The high shares of European countries in exports and imports documents that turkey meat trade was mainly a European phenomenon, with the exception of the close trade relations between the USA and Mexico. 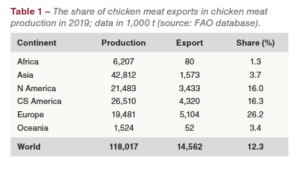 The ten leading countries shared 80.2% in global chicken meat exports, Brazil and the USA together 50.1%. Table 1 lists the leading countries and their share in the global export volume. Five of the ten countries are members of the EU (27). An extraordinary dynamics in the development of their exports showed the Netherlands and Poland. The export volume of the Netherlands grew from 731,500 t in 2009 to 1.29 mill t in 2019 or by 76.2%, with a sharp increase from 2015 on. A similar development showed Poland. Its exports grew from 214,700 t to 920,500 t or by 328%. Poland not only became the leading chicken-meat producing country in the EU (27) but also ranked in fourth place among the leading chicken meat-exporting countries behind the Netherlands. Thailand was the only major exporting country in Asia for chicken meat. The ranking of Hong Kong is misleading, as most of its imports from the USA, Brazil and mainland China were exported to South Korea, Vietnam and Taiwan. 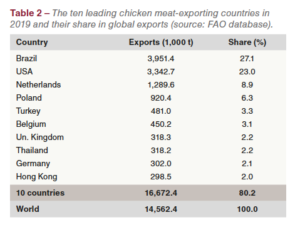 Table 2 lists the ten leading chicken meat-importing countries in 2019. One can easily see that the regional concentration in imports was much lower than in exports. The listed ten countries shared only 45.7% in the global import volume. Five of the top ten countries are located in Asia, three in Europe and one each in Central and South America and Africa. The much lower regional concentration in comparison to exports reveals that only a small number of countries had a high surplus in production over their domestic demand and that a much larger number of countries was not able to meet the growing consumption by their own production. Mexico imported most of the chicken meat from the USA because of the low tariffs within USMCA and from Brazil. Brazil was also the main country of origin for China’s chicken meat imports. 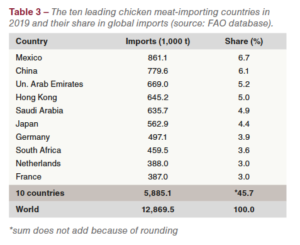 Turkey meat exports also showed a high regional concentration. The ten leading countries shared 85.7% in the global export volume, the top three ranked 55.4% (Table 3). A closer look at the composition and ranking reflects the dominance of European and American countries. Similar to the dynamics in chicken meat, Poland’s exports of turkey meat increased considerably in the analysed time-period from 73,000 t to almost 170,000 t or by 132%. In contrast, the exports of the USA fluctuated remarkably. They grew from 220,000 t in 2009 to 329,000 t in 2014 before they declined again to 242,000 t in 2019, partly a lasting effect of the import bans by several countries resulting from the Avian Influenza outbreaks in 2015. 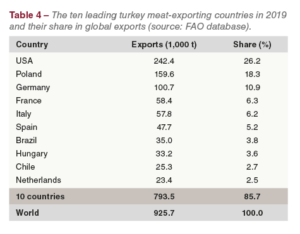 The regional concentration in imports was much lower. The ten leading turkey meat-importing countries only shared 57.8% in the global import volume, the top two, Mexico and Germany, together 28.6%. A comparison of the composition and ranking of the countries listed in Tables 3 and 4 reveals that turkey meat was mainly traded between European and American countries. Two African countries, Benin and South Africa, ranked among the leading importing countries in 2019. Benin imported turkey meat from 27 countries, with the USA, Brazil, France, Spain, Germany and Italy as the main countries of origin. Part of the imports was exported to other African countries. South Africa imported turkey meat from the USA, Brazil, Canada, Chile, Poland and Spain. At first sight it is surprising that Germany was listed as a leading exporting and an importing country. In 2019, Germany exported turkey meat to over 70 countries, mainly to other EU (27) member countries, but also to Benin and Hong Kong. On the other hand, it imported meat from 23 countries, with Poland, France and Italy as the leading countries of origin. The close trade relations with Poland are a result of the activities of the leading German poultry meat producer in Poland. Similar to chicken meat, high-value parts were imported and low-value parts exported. 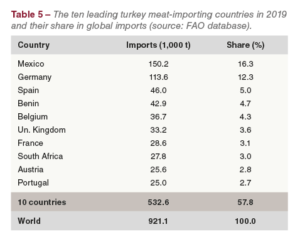 The considerable difference in the regional concentration in exports and imports is a consequence of the fact that only a comparatively small number of countries had a surplus in production over their domestic consumption and that turkey meat was consumed in several European countries without an own production.

The preceding analysis showed that the regional patterns in chicken and turkey meat production and in trade with these commodities differed considerably. In contrast to chicken meat, which was produced and consumed in all continents, turkey meat production and consumption were concentrated in Europe and the Americas. The trade patterns reflected this situation. While chicken meat was traded worldwide, turkey meat was mainly exported and imported by European and American countries. The shares of Africa and Asia were negligible.

One can assume that the lack of religious barriers and the growing demand for white meat will not only intensify production but also trade with this commodity. The much lower per capita consumption of turkey meat in comparison to chicken meat and the low acceptance of turkey meat in the populous Asian countries limits the dynamics in production and trade.

Patterns and dynamics of egg trade: trade flows in exports and imports at country level

An insight into the Spanish poultry industry – Part 1: Poultry meat

Patterns and dynamics of egg trade: trade flows in exports and...